The year commenced with a call from the mountains to my project manager Binita, some children had been taken by some monks was the communication she received, one of them being one of our sponsored children Yubraj.  The story goes on and gets complicated.  I thought you may be interested in how hard it can be working in a country like Nepal.

Further investigation resulted in being told that some monks had taken some mountain children to a monastery in India.   We immediately researched how this could have happened speaking to the schools during our visit in March.  We were told that a woman who worked for the monks had approached Yubraj’s family with a promise of a better life and a good education for him.  I really was not comfortable with this.  Yubraj’s family are very poor, his mother is mute and father partially sighted.  Yubraj is a very bright child; I have known his family since 2008.

Eventually we found the name of the Lama (monk) that this woman was working for.  During this time I contacted many organisations in the UK that dealt with trafficking, I thought they would help us as they worked in Nepal so I turned to them for their experience.  But, this resulted in hours and days spent to no avail.  I was determined to get this boy returned.  I knew it was going to be hard but there had to be a way.  Binita  managed to meet with the Lama in Kathmandu, I asked her to insisted that the child be returned by them.  It became evident that this was not going to happen.  The whole thing became very difficult and we knew then we had to work quickly and efficiently to make Yubraj’s return happen.

Eventually we were given a phone number for the monastery in India and Binita spoke to Yubraj by telephone, he was very unhappy, they had shaved his head and he missed his family.  We were told he could revisit his family in 3 years.  We spent many hours investigating and consulting with the Monastery.

Binita’s husband volunteered to go India and collected him this was the only way.  The name of the monastery was Kalimpong Sakya Gumba, Darjeeling.  We had to get special release letters prepared.  It was a long journey by truck, train and bus, I know this journey and it is hell on earth I did it in 2015 and with a child it would have made it very difficult.

Many of you may think that perhaps Yubraj would have had a better life, but I know Nepal  and I know how the monks work, I really did not believe that Yubraj would have a good life.   When he returned from India Yubraj was very thin, covered in bites and bruises from being beaten. He was looked after for several weeks at our office by Binita and her husband.

He had also been exposed to pornography.  He had been shown this on the computer of the Head Boy at the monastery.  Now remember Yubraj had never touched a computer before.  We only knew this because Binita found the searches on her laptop one day and was shocked and reported to me immediately.   But all was dealt with and Yubraj was returned to his family and all is now good.

This cost Hicap financially, something we obviously did not plan for, we thank Yubraj’s sponsor John Dunn for his contribution towards Yubraj’s return. My story is the short version a lot more went on, I do think that this was a great achievement for us and I am very proud of the work that our small team did.  We continue to support this family we deliver food regularly and of course Yubraj’s sponsorship continues. 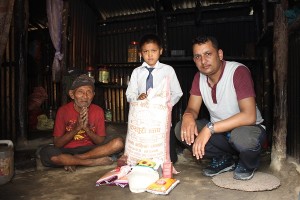 The Schools welcomed the representative of Hicap UK very gladly. The progress of the school can be clearly seen. The students look very happy. The salary of three months for a private teacher was given to the headmaster and the school thanked HICAP UK for their support and thoughtfulness. Suman Gurung has left school. His mother was present to receive his aid. Suman Gurung feels embarrassed to study in the same class as the younger students for many years. He now helps the family in the daily chores.

All the parents of Personal Sponsored students were present. An interaction session was conducted to inform the parents about CHILD TRAFFICKING, its cause, its reason and its consequences. The parents were very shocked when they realised that what had happened was indeed trafficking.  Many families cannot afford to feed their children 2 meals a day and therefore they feel that the promise of a better life, with regular food is an improvement.

All children were very happy to receive all the items given out.  Hicap do not only give the items for those children personally sponsored, we try to provide items for as many children as possible.

My book was finally published in April 2017.  Lots of hard work by Angela Kennedy especially, many discussions between us I think resulted in an excellent result, it was wonderful to see all those years of mine in a book format.  It has done pretty well, if you have any questions about me and how it all happened. 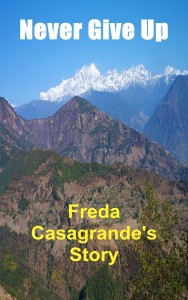 All I can say is read the book.  It is available from Amazon.uk or a signed copy from me.  The reviews have been good and I can assure you it is all true and spoken in my own words.

The year continued to perk up I gave a few talks to the Rotary Clubs locally and these resulted in more copies of the book being sold and some funding which we were desperate for.  Yolanda (one of our trustees) and her partner had a stall in the summer and raised some much needed funds.

Binita our project manager gave birth to a beautiful boy early August, so things went on stop for a while, but she soon got back into the swing of things.  Her husband Anil took on all the visits for 2017.  Her husband has been remarkable and continues to help us when needed.  What a great couple they are!

Nevertheless it has been a very hard year, regulations have been changed in Nepal and we have struggled to pay for the renewal of the NGO, but we did it.  I did not visit this year because of the struggle for funding my trip is not expensive but puts an added strain on the purse strings.

As usual the schools and children were happy to welcome us.  There were some trekking problems for Anil as there had been a lot of rain and the paths had been blocked.  But he managed to visit every child and bring back their letters and drawings along with some beautiful photographs.  It must be appreciated that these trips are not easy, I have done them, my choice to support an area that is remote was not an easy one, but if I didn’t who would, and who likes things easy anyway!!

Just recently we had someone from Twitter interested in us, he sent enough money for us to provide 5 benches for Chyamche School, earlier in the year we had some donations and were able to supply 2 benches, and we did provide some at the end of last year.  I now think that the school has enough desk space for all the children.

We will be making another visit to the schools at the end of December; many of you that have sent items will have them delivered soon, feedback from this visit will be given in January 2018.

2018 looks to be a promising year.  We are hoping to complete a project from 2 years ago. A hostel in Simpani that we built was completed in 2015 just before the Earthquake, but the internal works were not carried out, due to the Quake we always hoped to finish this project.   We have been working with a Rotarian who approached me after hearing a talk I gave to them in Oxford last year at one of their conferences.   We are hoping to secure this funding, it is a large amount of money it has been a long process.  I have a final meeting on 3rd January at the Officers Club; I hope to give them a good presentation and secure the funding. I will let you all know how it goes.

We also hope to get funding in 2018 to build a kitchen for Chyamche School, the person that sent the money for the 5 benches is fundraising for the kitchen.  He is from Australia and saw us on Twitter so we really are becoming International!! So fingers crossed 2018 will really help Hicap make a difference.

I hope that you have read this far and I have not bored you too much.  I have been working in Nepal since 2005, Hicap is the longest job I have ever had, well it is not exactly a job it is a way of life.

I thank you all for your support, it is not easy being a small International charity, but we manage to keep our head above water, there are times when things get really tough but I repeat my mantra and the name of my book ‘Never Give Up’

I and Hicap’s trustees wish you all a very Joyful Christmas and successful 2018.  We thank you for your kind support on behalf of the children, parents and schools that we work in, without you we could not do it, so please, please continue to think of us.