Retuning back to Kathmandu was no mean feat driving on roads lined with mountains.  Rocks were falling and blocking parts of the road.  There was fear everywhere. We saw trucks smashed, ambulances were out in full force.   Contacting people was difficult people were in turmoil about their families.  We drove slowly with Suman ( a sponsored child we were bringing to the Hospital).  Suman continued to be sick so we stopped many times.  Every now and then we felt an aftershock.

After diversions across fields and outlying areas we arrived at Binod’s home /our office.  His parents were outside and we were ushered into a field for safety.  I was lucky I had my sleeping bag with me! I was amazed how the people all helped each other, collecting bamboos and plastic coverings.  The field was a crop field so dirt no grass.  It was all a bit much for me, but quickly the men organised everything.  My head was banging I was in shock like everyone around me.  That night in our camp there were about 400 people.  There were about 40 in our tent /structure. 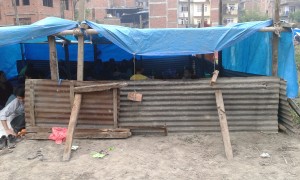 Looking at the picture above my space was on the right hand side.  Suman was next to me.  That evening Suman sobbed and sobbed.  We could not get hold of the people in Lamjung, we tried to tell him everything would be ok.  It was tugging at my heart this whole situation for these people.  When you see this on telly there is help around, here there was nothing.  Sleeping in such a restricted space was difficult.  I had people on my legs and dare not move my feet otherwise I would wake them.  I needed to go to the loo so gently I moved my body, I had a head torch with me, I always carry one in Nepal.  I carefully trod between bodies, and found my flip flops at the door, walked into the dark.  At this time I felt thankful that I was alive!! During the night there was another aftershock so scary.  The aftershocks made you feel so vulnerable, as you are in an Earthquake, I knew that life would never be the same after this.

The next day we were told that aid would arrive as water was running out and we had no where to cook.  It was all impossible.  But aid never came, that night we had torrential rain I was convinced that the whole tent would collapse and we would all be soaked.  People moved closer together to avoid the sides and the rain coming into the camp.   There were babies screaming,  a severely disabled lady in our tent was crying out.  Her mother and brother would carry her to the toilet area of the field holding a shawl in front for dignity.  It was becoming really awful diarrhoea and sickness were prevalent, still no aid.

I managed the following day to get back to our office  and do an Interview for the BBC.  It was a chance, as we had told to keep out of the buildings. As I listened to the news in the background before I was on, I could here the news of aid that we had coming!!!

As the days went on things got worse I considered leaving the site and going with the tourists, but felt I could not leave my people.  I was the only white person in our community of 400.  They treated me so well and I built up a really good relationship with them.  It just did not seem right to leave them for luxury.  We were told that we could go back to our homes some of us, I was so happy,  but later we were warned of further shocks.  So we stayed in the tent.  Sure enough there was quite a blast and tremor but it did not last long.  Still no aid.  How hard is it for aid agencies to have provided chemical toilets, clean water and some food.

The night of the 29th I spent at our flat, and slept pretty well but found myself waiting for aftershocks, and dreaming of the earth tremors. Binod and I had walked around and seen the devastation, there were people queuing for water.  So many of the historical buildings were completely destroyed. But the Nepali people were in groups helping and working together, but there still was no sign of aid.

This is my experience, of what and how it happened to me.  There is a lot more to say than just this, as for us at Hicap this is just the beginning, we have a tremendous amount of work to do. Please continue to follow my blogs  you will learn what  happens after an Earthquake. 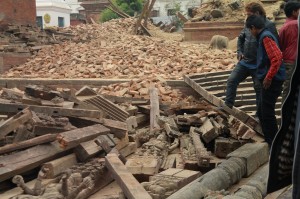