During my last visit to Nepal I was surprised to learn about how the Caste system still affects the people in the mountains. I had heard stuff but not personally come across it.  Some time ago Hicap  with the help of funding from FFK arranged to build hostel for children that trek many miles to school.  The intention was to house some of them overnight; this would help their study as they would not be so tired in school.  The hostel building was completed, and now is just the internal stuff to complete.  The locals were going to do these themselves, but the Earthquake stuck in April 2015 leaving no money to make this happen, and Hicap also became under great financial strain as temporary housing became imperative for familes. We would love to get the internal work done, and intend now to do a little at a time when we get funding that will stretch to this.  Why am I telling you all this.

Because I feel that you need to know about a socially disadvantaged group a caste called Dalits. Dalits are in a very difficult situation as they are considered untouchable.  Following the Earthquake many Dalits lots their homes, but could not stay with others as they were considered unclean. The constitution of Nepal has erased this system but these medieval  practices still exist in the remote areas of Nepal. Dalits are the socially disadvantaged group of people who are forced to be in the bottom of the social structure. Dalits are considered as untouchable and if someone touches them that person has to go through the processes of purification. Dalits are not allowed to enter any temple where other castes are, or houses of other castes.

These families are compelled to stay in broken down shacks. The children are not allowed to stay in the houses near the school. They cannot use the nearby taps for water so have to walk miles to obtain water.

The headmaster at Simpani School tells us that these children are often bright, but because of the issues that these children face, their time at school is hampered by such difficult circumstances and they only get average marks. If we could just get some of the basic work done at the school Hostel we could secure a reasonable education for these children.  These children have no choice but to accept this treatment. 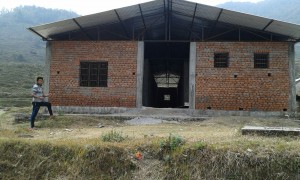