There is only so much we can do

This story began with a mountain accident.  Hicap’s project manager was trekking to Bahundanda on one of his normal inspection trips.  This was early 2011 when Binod called me on Skype to tell me about a dreadful accident on the road on the way to one of our villages, the bus had turned over and gone down the side of the mountain, 5 people were killed.

It was a miracle as this particular day he had decided not to take the bus and trek.

He explained as he arrived in the village one family was very distraught,  he spoke to them and found out that the news had just arrived of a family member that had been on the bus who was killed.  They offered him tea and he saw how this family was in severe poverty.  They said that they were struggling with a child, her name was Aruna.  They explained that she was very ill and the uncle was travelling to the village with medicine for the child.  Binod immediately saw that something was seriously wrong with this child and ordinary medicine would not help. They said they knew that she needed hospital treatment but they did not have any money and they had been refused treatment. 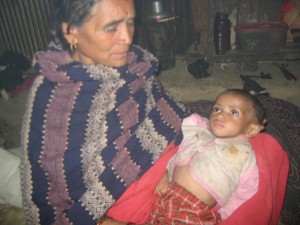 This child needed to get to hospital,  Binod go in touch with me immediatly and I asked him to return to the family and make arrangements for a hospital visit.  The grandmother accompanied the child along with Binod. At the Hospital they originally diagnosed TB but after further tests they found that Aruna had Meningitis and it was in its late stages as no treatment had been given.

Hicap pulled out all the stops to bring in funding with hope of being able to save this child’s life.  After 2 months Aruna was discharged fluid had been drained from her brain and she was fitted with a tube to facilitate her feeding. 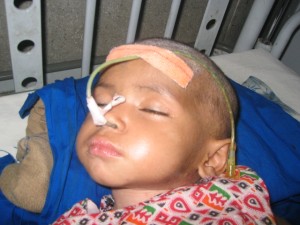 On leaving hospital her parents were given strict instructions of how to clean the tube.  This was a difficult time for this family, Binod spent and lot of time with them explaining what had to be done to clean the tube on a daily basis, but this was something that a mountain family would never have experienced , only having very basic facilities, no running water, cooking on an open fire in a basic stone house. But she returned to her village Bahundanda and here family were happy just to have her alive. 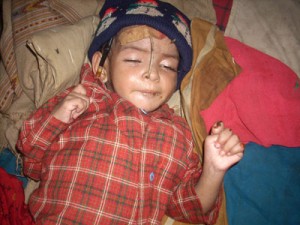 As time went on she began to eat solid food and did grow, but her parents were worried as she did could not communicate, and her responses were very weak. We continued to support Aruna the best we could.  During my 2012 visit I found her be growing but, quite obviously brain damaged.  We had been told by the hospital that this was likely, but I hoped that she would progress. Her life was saved, but unfortunately due to the lateness of the treatment, we could do nothing about the damage her illness had caused. 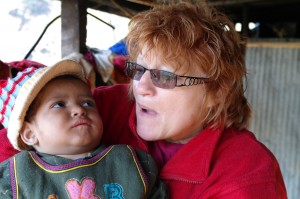 Following this visit we arranged for another hospital check-up, just to confirm that we had done everything that we could. 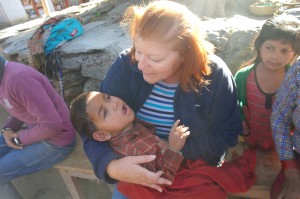 Following her last hospital visit she is back in the village.  The doctors have left the tube in her head where they had drained the fluid. They told us that there was not any need to remove it as it would just mean additional surgery and it would do no harm.

The lasted report is that she is doing well, but of course will never walk or progress, or do the things that a normal now 5 year old would do.  So we did what we could do, but one thing we can’t do is perform miracles. 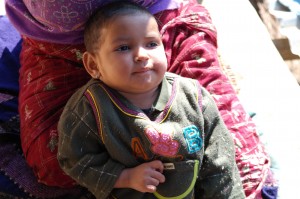