Something I began to question after visiting Nepal about 25 times over the last 10 years, sometimes staying for 2-3 months at a time.  Why are there so many orphans, are the parents dead, this is how we in the Western World think of orphans. Yes some do lose their parents, but many are abandoned.

Why does this happen, the reasons are upsetting, and again due to inequality.  Many young women marry early, they have no idea of sexual relations or family planning.  Many husbands treat their wives as slaves, if there is a shortage of food the husband will eat first leaving his wife to have what is left.  The husband will leave his wife for another woman claiming that his wife was not any good.

Then what?  if they have children he will not take them, so immediately the woman is on her own with the children.  But it gets worse as the husband takes on another woman with children whose husband has disappeared, he will not accept her children so these children become orphans.  These children sometimes live with their grandparents, or end up begging on the streets of Kathmandu.  Some work for rich families as slaves.

Women are often the breadwinners in Nepal, you often see them cleaning, stone breaking, working in the fields, while the men play Ludo laugh and joke.  The women never complain, they know their place!

We know that education is the only way forward, but still over 25% of the children in Nepal do not go to school, they work in the fields, on buses or beg.  They have to earn money to survive.

The caste system plays very large part in keeping the poor marginalized in rural Nepal. Discrimination has been illegal in the country since 1962, but you would never think it when you speak to those in the cities.  The caste system is almost like racism.  I have certainly heard many Nepali’s put down other castes that are considered “lower”.  ~There has to be change!

I say educate the poor give them a chance, and there will be change. 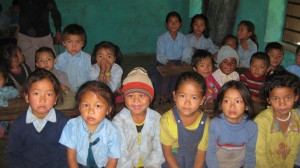