Binod our project manager first identified the twins Karan and Arjun when they were 7 years old. In late 2012 during one of his regular visits to the villages in Lamjung. He was informed that they were living in a dreadful situation.  He contacted me in the UK and was so very worried about them.  At that time we were so busy doing a lot of support in the area I felt that we could not really take on another desperate family (or could we I asked myself?).

I asked Binod to keep an eye on the family; on his next visit he found the mother desperately ill he happened at this time to be accompanied by one of our volunteers, who was a practising nurse.  She could see that this woman was very seriously ill. Binod contacted me immediately on his return from this visit.  Before we could do much more, we were informed that the mother had died. We decided to give some help to this family by placing the twins in the local residential private school.

This was a very expensive way forward for us, but something had to be done, as their father was also ill.  Just six months later Binod called to say that their father needed to go to hospital and an ambulance would need to be called. That would cost and there was no one to pay for this.  So we ordered a stretcher and an ambulance. It was just an awful situation.  I then was very suspicious that both parents had died within such a short time of each other.  On investigation by Binod it was found that both parents had died of HIV AIDS.

So Arjun and Karan were now complete orphans, there was no one to take care of them.  Putting them into residential school was not the answer but what could we do?  We got reports of them crying themselves to sleep it was a real worry for us.  I flew out in January as we would need to get the boys tested for aids.

This was the first time I had met the twins, they must have been so traumatised. I collected them from the school with Binod and we made the journey to the hospital in Pokhara.   We purchased anti-sickness pills for the boys.  (all children and women from the mountains are travel sick it is something that I have become aware of)

It was not a great journey as the travel sick pills did not work that well, we stopped many times for the boys they were so poorly.  They must have wondered where this western woman was taking them. Before we checked into a guest house we bought tickets for the  blood tests at the hospital for the next day.  It was not an easy visit to the hospital.  Arjun was fine until he saw his brother having a needle in his arm he ran off.  We did get him back to do the test.

It was a very worrying time.  We had to go back to the hospital the next day and queue up for the results.  I was so worried. But the most amazing thing happened the twins were both NEGATIVE!!! Both Binod and I were overcome with joy.  We went back to the Guest house for lunch and spent a few days with the boys just trying to give them some love and affection.  We spoke to them about their parents they said they knew that their parents were in the sky.

Looking at their tender faces of innocence brought tears constantly to my eyes.  They are very bright boys full of life.  Arjun loved dancing, on one of the evenings he mimicked Michael Jackson, did he know that?  He told us his father had taught him.

So we travelled back and they returned to school.  But , we knew that this situation was not going to be right for them.  As they had no one to show them love and affection there.  We searched for relatives that may take care of them, but they were all too poor to contemplate taking on 2 children. The residential school was also very expensive we went over and over the situation.  Binod and I visited them regularly at the school.  They were coping all right but showed signs of being quite naughty at times.  When I visited they ran to see me calling me Freda Mum so joyfully.

We then came up with a great idea; we had a house with a foster carer in, who looked after one of our abandoned children Sanjay and also Sanjay’s grandfather.  We could accommodate the twins there.  It would make more sense. It would also be less costly, and they would be near a local school and get much better attention.  But as this was being arranged the Earthquake took over our arrangements.  Our house was destroyed, and needed to be rebuilt.  So we had to house our foster family in temporary accommodation.

We did get one family member to look after the twins during this time, but the boys just were not happy there and ran away.  They were found pretty quickly, the uncle that was looking after them said he could not cope.  Schools were closed at this time because of the repercussions of the Earthquake.

Our foster father is in the process of rebuilding the house.  Without funding this would not be happening.  We are so grateful to those that have helped us in this rebuild. 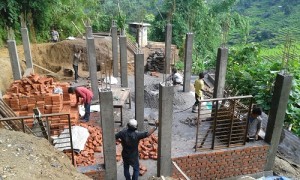 Whilst this is happening the foster family including the twins are sharing one rented room.  They are really happy to be with a family, they are going to the local school and I am sure that Sajay our other child there is enjoying their company.  Whatever happens now these twins are in our care and we will never abandon them.  Here they are below with Sanjay ready to go to school. 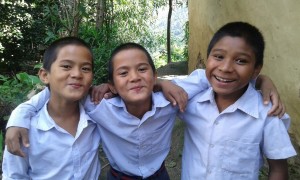