My last trip to Nepal was just amazing and sharing it is all I can do, my attempt to bring you into my world begins here.

I arrived in Kathmandu on the 18th November 2013.  It was late and time to sleep, but the country was in turmoil as a general election was happening.  There was a close fight between the Maoists and the Congress.  Bombs were going off in polling booths and there was little transport.  I was lucky Binod (our project manager) was at the airport to collect me.

The following day Binod needed to vote, so with him and his wife we walked around the troubled areas.  There were police with guns everywhere, the voting booths were tightly controlled, most of them in very open areas.   We could not move forward with certain visits yet as Kathmandu was too dangerous.  I never have ever felt threatened in Nepal even during troubled times, as the people have always shown me the greatest respect.

The following day the decision was made overall, but very close the Congress won and Kathmandu was celebrating, but there were many in the rural area’s that supported the Maoist party. Below women celebrating the Congress victory. 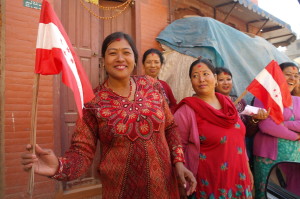